Long before the Percy Jackson series hooked a generation of young readers, I was a middle school mythology buff. My sixth-grade Halloween costume backs my claim.  In a twist of irony, I dressed as Demeter, goddess of the harvest and agriculture, parading about with a bundle of wheat in my arms. Resulting from this formative passion, in daily life I see mythological parallels with a surprising frequency. 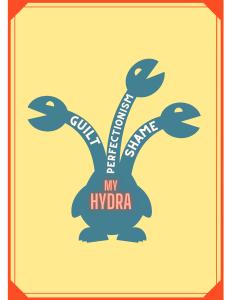 I relate to Hercules, not because of any superior strength I possess, but rather because at times, I battle with my own many-headed hydra whose vicious and tenacious heads of perfectionism, guilt and shame seek to keep me from progressing to my ultimate destiny. Just when I thought I bested them, along came celiac and wham! We were locked in battle once again.

Nothing helps one slay perfectionism like motherhood. If the fallout of birthing, sleepless nights, suspicious smears on your clothing and walls doesn’t do it, the pressure to keep up with the current trends in toys, games, snacks, sports certainly will. Or so it was for me. It took nearly a decade, but eventually, I threw in the towel, tore off the apron, and adopted the approach of “sometimes good enough is good enough.” Sorry, unnatural colored yogurts and the American Girl empire, I am out. At peace with imperfection, there was one less head on my hydra.

“Guilt implies wrongdoing,” I was told by a wise therapist tasked with breaking the hold that generational Catholic guilt held on me.“  If you didn’t do anything wrong then you should not have guilt.” And thus, without guilt you are able to circumvent guilt’s menacing twin, shame. Knocked them dead too!

And then celiac descended. Her skin! Lifelong eczema was written off as the curse of swimming in chlorine. Erratic sleep, surely was due to migraine. Weight loss had to be the medication. I could justify it all.  But in hindsight – oh NO! – it was all there.  I should have known. I am her mother. With the hydra heads of perfectionism and guilt staring at me, I remind myself “guilt implies wrongdoing.” I didn’t know better, I did my best. Phew! I successfully eluded the first two, the third proves harder to best.

While I can laugh about it now, the shame from this moment in my life still brings me pause and makes me wince. 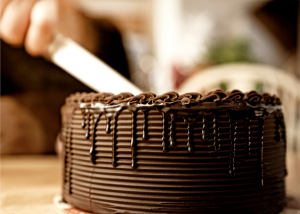 We celebrated my son’s birthday when Grace was at her most ill. Her absences were racking up as quickly as her weight was dropping.  The tension and worry were palpable. She was resistant to eating and I was terrified she was on the verge of anorexia. Short on patience and tired of complaints about every bit of food I offered, I just needed her to eat. With relatives over for the celebration, my tolerance for more shenanigans was nil. Candles illuminated the insanely delicious chocolate marble cake with cream cheese frosting. Slices of chocolate marble perfection were passed out to each guest, the largest of which went to Grace – much to the birthday boy’s dismay.

My kids recall this as my Trunchbull moment, referencing an iconic scene in the film Matilda wherein the ugly and evil schoolmistress Miss Trunchbull forces a young boy to eat an entire chocolate cake. Grace took her fork and poked at the cake with disapproving revulsion. Her brother was balking at the injustice of the uneven cake slices. My patience broke utterly and completely. In a show of epically poor mothering, I quieted my son by saying something to the effect of “if anyone in this room needs a larger slice of cake, it is your sister, not you.” And then I turned to Grace who still was delicately dragging her fork across the frosting and I spat “Eat it!”

Midway through the slice, she complained that it tasted bad. I lost it. “It is the best cake on earth! Crafted by angels, gilded with pixie dust! Eat this glorious masterpiece and stop complaining!” The room was silent. All were aghast. Grace ate ALL of the cake.

The jovial tone obliterated.  After a quick unwrapping of gifts, folks gathered their things to leave. Grace left the dinner table and made it as far as the kitchen where she slid down the cabinets onto the floor, and there she remained, moaning and clutching her stomach.  As a relative stepped over her on their way to the door, offering her wishes of “I hope you feel better soon,” I realized that maybe I played this one all wrong. Cue shame.

Though we laugh about it now, the vestiges of perfectionism, guilt, and shame remain. A birthday ruined. Clearly not perfect. Force-feeding. Straight up wrongdoing. Morphing into the Trunchbull. Shame.

I wonder if that wise therapist is still around. I may have more work to do.